I’ve been motion Picture Still Photographer for 30 years. It’s the only kind of Photography that I have ever practiced. I was fortunate enough to start right out of college, shooting stills on Commercials in Atlanta and quickly moving into stills on feature films. I was never interested in Photography until College while majoring in ART. After college, I attended The Portfolio Center in Atlanta with a concentration on Photography. It was there, over the two years that I became a photographer. I guess my photo tip is to shoot what you see through the eye piece. I don’t believe in cropping after the fact!

Best advice to a young photographers is to try and develop your own style and build your career around your style and interests!

Tell us about The Hangover final credits?

Oddly enough, I shoot mostly on big budget action films, but the most questions I get asked about are the end credit stills from The Hangover. That film was one of the great joys in my career and shooting all of the end credit stills was so much fun. I had know idea that they were going to be so well received!

I credit Director Todd Phillips with that brilliance to show what happened to the guys through the photos that they shot that crazy night. I shot them all with a point and shoot camera. At first I shot them on my Canon I DX, but Todd said they looked too professional and instructed me to shoot and compose the images as if a bunch of drunk guys took them.

So I bough a point and shoot camera with a bright flash, and I started to shoot as if I was one of the three main characters in the film! It was so much fun and I was so surprised to see and hear the audiences reaction when I saw the film in the theaters ! A great memory in my career! What made you get a BlackRapid strap?

Before I bought my first BlackRapid camera strap, I was not a fan of camera straps in general, as they always seem to get in my way and I really enjoyed just holding and using one camera at a time! Then I bought a BlackRapid strap and well, it turned my world upside-down!!

I just loved the design and comfort and totally embraced all of the BlackRapid products! They really allow me to comfortably work with several cameras at a time with total ease and comfort and they really take all the pressure and weight off my shoulders and neck! Now, I can’t Imagine shooting without them!!!

Born in Nyack, New York, Frank Masi studied Art at the renowned School of Visual Arts in New York City. There, he developed an keen interest in photography, having been both intrigued and inspired by a local Nyack “black and white” photo exhibition done by his fellow students.

Just shy of his final graduation credits, Masi took a personal risk and enrolled in The Portfolio Center, Atlanta’s intensive two-year photography program. While in his second year, Masi began earning a living as a commercial advertising photographer. 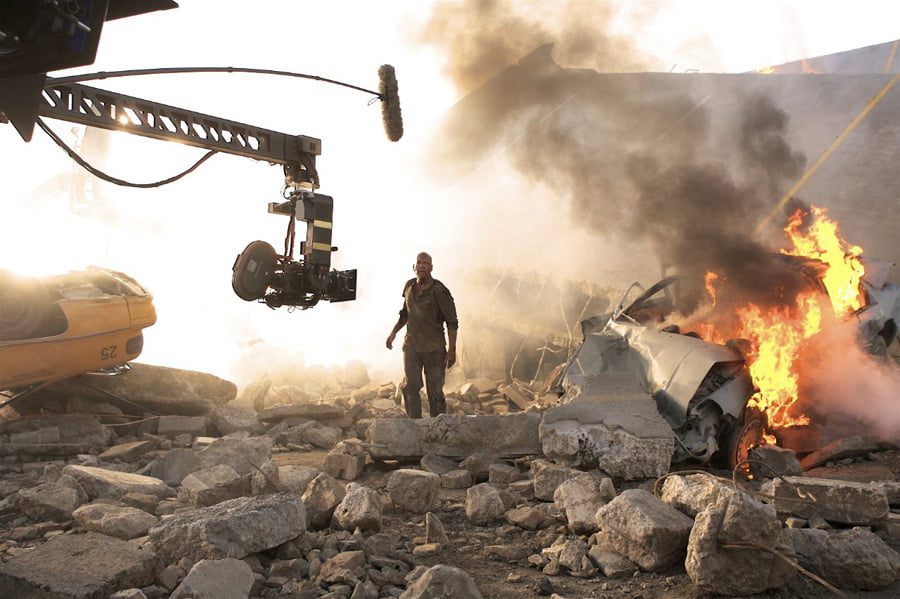 After graduating with honors from The Portfolio Center, Masi stumbled into unit still photography. When shooting an ad campaign for IBM on a commercial film set, he discovered his passion for production photography.

Shortly thereafter, Masi entered into the world of shooting stills on film sets, beginning with the beloved family film feature GORDY, shot entirely on location in Atlanta. After wrapping the film in Atlanta, Masi made the inevitable move to Los Angeles to pursue his career as a motion picture still photographer in Hollywood. Since his arrival in Los Angeles in the early nineties, Masi has lent his still photography talents to more than seventy feature films, including the upcoming JUMANJI: WELCOME TO THE JUNGLE and JUMANJI: THE NEXT LEVEL, the upcoming JUNGLE CRUISE, HOBBS & SHAW, VENOM, RAMPAGE, I, TONYA, THE HANGOVER, THE ROCK, CON AIR, ARMAGEDDON, UNBREAKABLE, SIGNS, TROY, ANCHORMAN, WAR OF THE WORLDS, LADY IN THE WATER, and WE ARE MARSHALLS, among many others.

Over the years Masi has had the pleasure of working on twelve films with Bruce Willis, and most recently has become a favorite on Dwayne Johnson’s projects and is looking forward to starting his ninth production with “The Rock” in early 2020.

In the late nineties, Masi was invited to join the prestigious organization of Society of Motion Picture Still Photographers. His works have been exhibited, with other S.M.P.S.P. members in gallery showings across the States, as well as hanging in international exhibitions in both Prague and Havana. In 2006, Masi garnered a nomination for The Excellence in Unit Still Photography Award for Motion Pictures at the ICG Publicist Guild Awards, and in 2012 Masi won this coveted honor.

In January of 2020, Masi was honored by the SOC (Society of Camera Operators) with the Lifetime Achievement Award for Still Photography.

Masi’s images continue to appear regularly in books, magazines, newspapers, and websites worldwide, as he rapidly approaches his thirtieth year anniversary of shooting on sets.

Masi continues to reside in Atlanta and Los Angeles with his wife Julie and daughter Maddie.