I fell into photojournalism in 1988 (seriously…fell in). By late 1996, I was living in Mexico City working as a photojournalist and began to see the writing on the wall. I had just gotten attacked by an angry mob and was otherwise getting really tired of getting shot at.

So I went the movies. I saw the credit that said “Still Photographer,” and I pointed to the screen and said out loud, “I want THAT job”. So I moved to LA and started all over again. I always refer to shooting on set as diet photojournalism. The skills are the same: Be quite, lay low, don’t affect the action that’s going on front of you and capture the story.

I came up through low budget world (Leprechaun in tha ‘hood, Blood Surf, Leprechaun: Back 2 tha ‘hood) and television (My Name is Earl, Modern Family). From there I got movies like Hidden Figures, The Boss, Ghostbusters, Game Night, and Captain Phillips (alongside BlackRapid Ambassador Jasin Boland) Do You Have a Photography Tip?

It takes just as much effort to build a business shooting the kind of photos you want to do and are interested in than it does to build a business doing what you don’t want to do. So, if you’re going to put the effort into being a professional photographer, shoot what interests you; not just what you think will make you money.

Also, I wish someone had told me when I was younger to pay more attention to ergonomics. I ran around with 35 lbs of camera gear on one shoulder, thinking I was invincible. Let’s just get this out of the way: Photography is a rather unhealthy endeavor.

30 years ago, a sore back, bad shoulders and a ratty camera bag were badges of honor. I tell a lot of the younger folk out there that it’s super important to invest in proper bags, pouches and, yes, camera straps. Take it from an Advil Warrior! I know it’s a bit of a cliche, but every day on set is really different (which is I guess why it doesn’t get boring). One of the greatest challenges is finding the right shot while taking everyone’s likes, needs, and preferences into account.

And I had to fit all of them into one frame which they would all approve during filming where I couldn’t direct anything (and stay out of the light, the camera view, the direct eye line of the actors and reflections). Or as I like to call days like this –”Wednesday.” What’s In Your Bag?

(Yes, I have a camera problem) 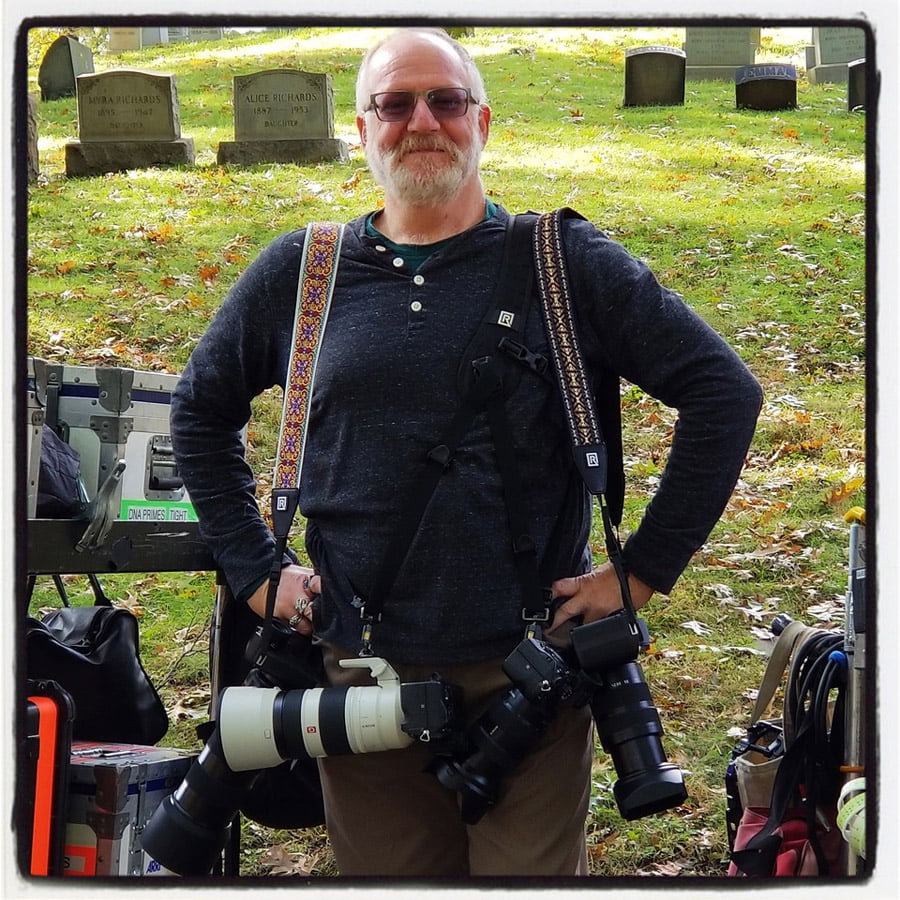 I Carry a Variety of BlackRapid Straps

Back in the day when I had to keep an SLR in a sound proof box called a sound blimp, I used the DR-1. This strap literally saved me from needing neck surgery (or so my doctor told me).

Now that we are mirrorless, I use the Hybrid breathe when I’m slinging 2 bodies.

I still have a few Classic and Sport straps which I keep around as backups or which I’ll loan out to crew members who I see struggling sometimes (Visual Effects data wranglers are taking pictures all day. I’ve also loaned straps to countless focus pullers who are holding a remote focus unit around their necks).

My Leica SL2 is on a Black Rapid Groovy strap, which is a great throwback to the kind of strap I used when I was a young photojournalist.

The BlackRapid strap is a great way of carrying long glass around.

And yes, when I took a trip to Italy and only brought my phone, I had a WandeR Bundle attached to it. Years Ago, BlackRapid Introduced the Woman’s Slim Camera Strap. Should We Bring It Back?
Next Post: Nicole Elliott Talks About Launch of Upcoming Woman’s Camera Strap