I developed a passion from a young age for outdoor adventure sports such as mountain biking, surfing and snowboarding.

Photography was a natural compliment to my outdoor pursuits, as it allowed me to capture the dynamics and emotion of the incredible moments I was experiencing. When I turned pro in 2010, I found a lot of excitment and opportunity in motorsports photography, which is still a big part of my work today. I am part of the Red Bull Photography Team and since 2020 a Sony Imaging Ambassador. Do you have a good photo tip for us?

Don’t be afraid to leave your “Comfort-Zone,“ usually I take my favorite pictures when things get tricky. And always, safety first! I got off the phone with the Red Bull team, having agreed to do the crazy project Megaswing. Then I looked at a test shot, which was taken from another jumper’s helmet camera, and thought ‘What the hell! How am I going to do that? I had to phone back and clarify that I’m not a skydiver, but they explained that it was OK because I could be in the basket of the second hot-air balloon they used to jump from.

I’d tried shooting from inside the basket but it wasn’t really working. The jumper dropped for the first 2-3m and it didn’t look like he was swinging, just falling. And it was the same when I was outside the basket in my harness – I just wasn’t getting the impression of the guys being on a swing. The only time to shoot seemed to be early in the morning or in the evening, because that was when the wind dropped enough. It was also when the light was best too, but this didn’t really give us many opportunities to get it right. 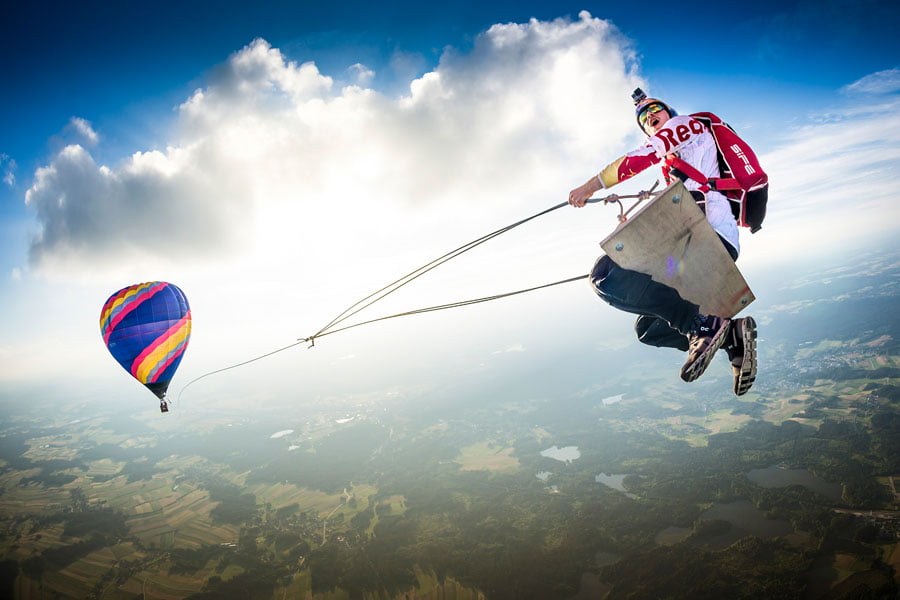 The team had to land to pick up the jumper after every attempt, so they were lucky if they got 2-3 tries every day, and perhaps 8-9 in total. I was able to be in the basket for 4 tries (I had to share the space with the video-crew), so time was an issue too.

It was time for a re-think – luckily I brought along my monopod and some radio triggers, so I could get the camera further down and away from the basket. It was still tricky, because you can’t see through the viewfinder to compose the image, but
I was using a fish-eye lens so I was fairly confident of getting everything in as I was super close to the jumper. We had something that was OK, but not perfect and I really wanted something a bit better. I asked the skydiver to turn his head to look at
me when jumped, so I could see a bit more of his face. As it turned out I got this great expression too.

The best image of the Megaswing project was the very last one. I was really nervous, because there was a lot of pressure to get it right and deliver “The Shot.”