“I moved from NYC to Minnesota to live among the wildlife I love to photograph.” There’s an osprey nesting site that I’ve loved visiting for years. And recently two young ospreys were blown out of their nest by a tornado. I was there to photograph their careful re-nesting. Two young ospreys — about a week from being fully fledged — are safely back in their nest after being blown to the ground on Saturday, 7/18/20, at 1:15 AM, by a tornado touching down on an east-central Minnesota lake.

They were searched for during the weekend and finally found and rescued by lake resident Ritchie Ronning early Monday morning. He immediately brought them to be health-checked at The Raptor Center in St Paul. They both were fine. On Tuesday morning they were delivered back to Ritchie by volunteers from both The Raptor Center and Twin Cities Metro Osprey Watch to be placed back where they belong – in the care of their parents. After sticks were raised up to help rebuild the nest, and fish were placed in the nest just in case the parents didn’t quickly return with food for them, then the delicate re-nesting procedure began.

Each young osprey was carefully hoisted up the 32’ span to the nest by rope, separately, in a closed canvas bag. The parents stayed watching from the sidelines the entire time we were there – and they even took flight twice in defending their territory when unfamiliar ospreys and eagles flew overhead. After placing the second young osprey in the nest we watched from a distance, and within three hours the parents began interacting normally with their young. Ritchie took the lead role in their rescue and re-nesting — thank you for a job well done! And thank you for the help and guidance of Terri Headley of The Raptor Center and Vanessa Greene of Twin Cities Metro Osprey Watch! This occurred at a nesting site that I have been visiting for many years – and each time I feel extremely appreciative to be able to capture the daily activities of generations of beautiful osprey families. 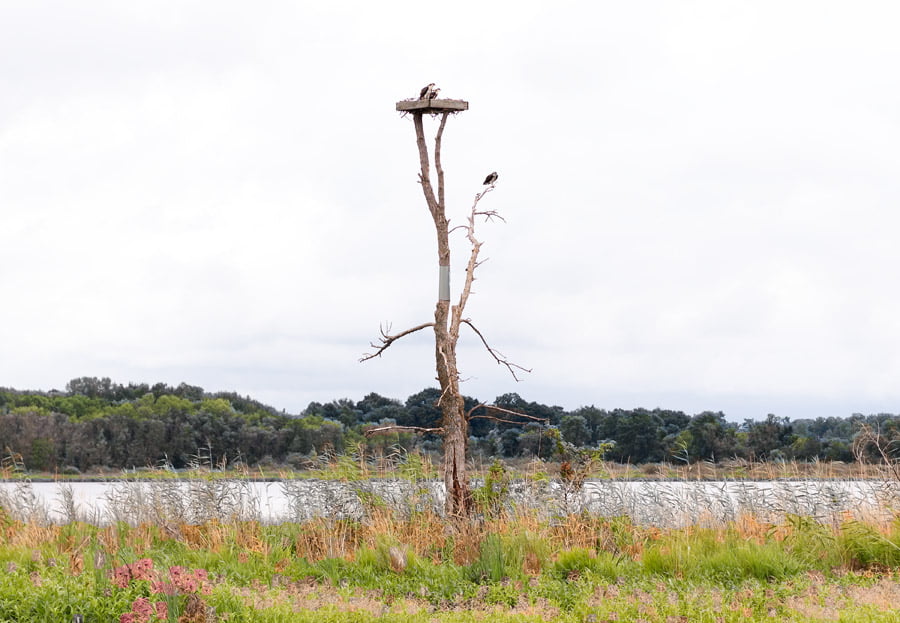 Do You Have a Good Photo Tip for Us?

Spend time with the wildlife you plan to photograph, learn their behaviors so you might anticipate their actions. What’s In Your Bag? To see more of Steven Rossi’s work and to follow or connect with him online, check out these following links: